Our online store is open! Please order early and often! The Prehistoric Period, The Tobacco, Caffeine and Alcohol Period, The Estrogen Period. The Evolution of Dad

As we approach the beginning of June and Mother’s Day celebrations begin to wind down, we turn our attention towards those two hours dedicated to Dad, commonly known as Father’s Day. This year, Father’s “Day” will fall on June 21st.

I think this year Dads should be rewarded for their evolution as a species (for the newlyweds out there, after five years of marriage, women consider men a different, inferior species). In the April issue of Anthropological Quarterly AQ, the evolution of Dads is discussed in great detail. Prehistoric Dad Period:
During this period, Dads were characterized as antisocial, belligerent malcontents. The phrase, “Wait until you father gets home”, was usually followed by fire and an abundance of meat. Discipline was instilled with a club. This phase lasted from 200,000 BC until 1698. Tobacco, Caffeine, and Alcohol Dad Period:
During this period, Dads were characterized as antisocial belligerent malcontents. The phrase, “Wait until you father gets home”, was usually followed by violence, incoherent screaming and uncomfortable dinners. Discipline was instilled with a belt. This phase lasted from 1699 until 1995. Presently, Dads are characterized as emotionally soft, rudderless jellyfish. The phrase, “Wait until you father gets home”, is usually followed by sushi, ice cream cones and trophies for coming in 8th place in a six-team tournament. It’s a total shambles. Discipline is instilled with a hug. This phase began in 1996 and continues today.

OK, so we may have over shot the mark a little, but we are trying. This year reward your father and all fathers for their collective evolution by giving them a fantastic gift from JT’s Confections. Let the taste of JT’s bring your Dad back to a time when Dads were scary and eye contact was to be avoided at all costs.

P.S. Because the earth is two degrees from catching on fire, local pick up only… 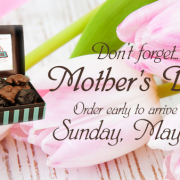 Words of Wisdom for this Mother’s Day…